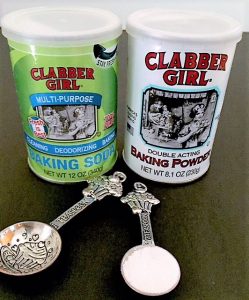 This is considered a base and requires some type of an acid in your recipe to work.

I’m always reminded of this concept when I make my grandmothers recipe for Red Velvet Cake. At the end of mixing the recipe I add baking soda to vinegar where you can see the bubbly reaction take place. I did an experiment and left this part of the recipe out to see the difference; the recipe without it did not rise as much as well as, the taste was also changed.

This just needs moisture and heat, not an acid to work. When C02 is trapped in the batter, it causes it to expand when heated and this is what causes your baked good to rise.

Baking powder has both an acid and a base

*Single Acting Baking Powder: Only needs moisture to produce the gas and you should bake this immediately after adding.

If both baking soda and baking powder are used together in a recipe it usually is due to needing the additional leavening power for the baked product.
So little did you know when you put something in the oven to bake what was really going on behind the scenes!