I wanted to share some fun photos along the way in my journey into the baking and pastry world.  Thus far, it has been such a thrilling ride and a real passion to be able to pursue this sweet line of work.  Its been said, when you get up and do what you love that it’s not work, I absolutely find that to be so true!!!!  This has been such an awesome experience and here are some fun pictures to share with you. 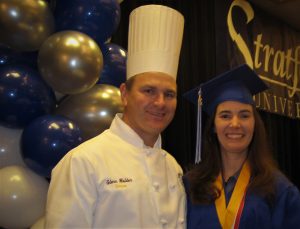 Exciting day graduating from culinary school in Falls Church, VA.  I absolutely couldn’t wait to get to class everyday and learned so much by my great Chef Instructors.   Also had the great opportunity in assisting the Chef at the Finland Embassy hosting a dinner for the ambassador.  I remember peeling and slicing so many mangoes which can sometimes be a challenge in itself!  It was a great experience all around especially in food production and preparing for a large dinner party.

I had the distinct honor in meeting the former White House Pastry Chef, Roland Mesnier at a local gingerbread house contest where he was one of the judges.  He was so kind and I enjoyed so much talking with him.  In the contest, I submitted a “German Gasthaus” Gingerbread house which he really liked.  What a thrill!  Additionally, I have his cookbooks and I love reading through them reflecting on meeting with him and his incredible career.

While as assisting at the Metropolitan Cooking and Entertaining Show, I met Paula Deen’s sons who were giving a southern cooking demo, of course there were grits involved and it was right up my alley being a southern girl myself.  Both were so much fun to be around, incredibly kind, and and spoke so highly of their talented mother, Paula.

It was such an honor to have my recipes published in these two great magazines!  To my surprise, in both cases my recipes were submitted years in advance before these publications came out.  Ironically enough, it was my mother who found my recipe in the Southern Living via her neighbor!  Luckily, I still had my copy of the magazine and with excitement turned the pages to see the recipe.  It was super cool and Southern Living is one of my favorite magazines I have been reading for years.

Taste of Home is a magazine I subscribed to when I was a young bride and learning to cook.  It was such a thrill to have a recipe published in this issue.