Cinnamon rolls are such a favorite to so many of us aren’t they?  There is just something about the aroma when they are baking, the ooey gooey dough of cinnamon sugar, and that sweet icing dripping from the top.  What is not to like about that!

These mixed berry crumb buns are a take on that classic favorite, filled with berry jam, brown sugar, and a sprinkle of crumb mixture.  They are topped off with a crumb topping and of course that great sweet vanilla icing we all love.

I recently received some mixed berry jam as a gift and it is so delicious, it went perfectly on toast and even on a PBJ.  I have never had that flavor combination before and really loved it.  Additionally, I had so much of it that I decided to find a way to use it for another breakfast delight.  Cinnamon rolls came to mind and it quickly became adapted into its cinnamon roll cousin, the berry crumb bun.

I remember making cinnamon rolls in the bread machine and how the dough was just perfect and tender, remember those? They really did make awesome bread.  This recipe uses a really easy sweet dough that is user-friendly that you can whip up in your mixer.  The recipe is one of my favorites I adapted from “The Art and Soul of Baking.”

Come to think of it, these buns are a cross between a cinnamon roll and a berry pie.  You get the fruitiness of jam rolled up into a sweet dough along with a touch of brown sugar, then topped with a crumb topping.  The drizzle on top just brings it all together.  So, in some regards you are eating a mini version of a berry crumb pie.

Need a new breakfast idea or sweet treat for brunch, these would make a perfect addition for both.

As a side note, you could also adapt this recipe into a cookie using a sugar cooking dough and rolling it up the in the same fashion.  A great idea for your recipe collection. Print Recipe
Berry Crumb Buns
Sweet dough filled with berry jam and brown sugar, rolled together and baked with a crumb topping and vanilla drizzle for a fabulous breakfast and brunch treat! 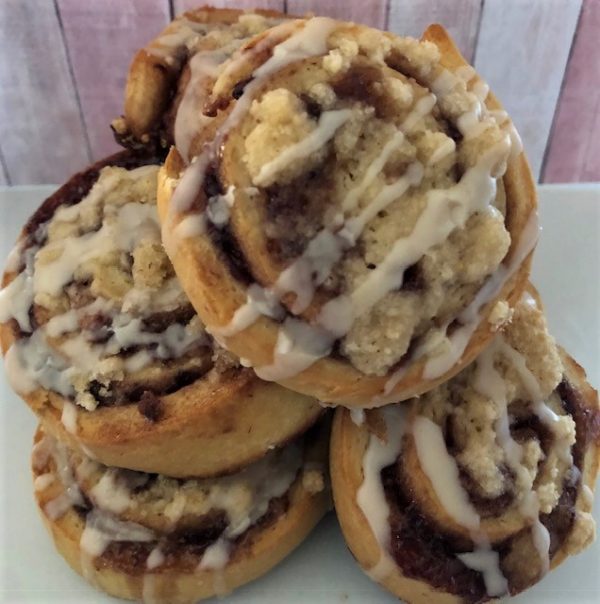 The dough recipe was adapted from sweet dough in "The Art and Soul of Baking."

The crumb topping can be made up ahead of time and stored in the refrigerator or freeze for a a few months.